There are few cities in the world that are as historically fascinating as Beijing. Despite this unique condition, Old Beijing has suffered some of the worst destruction in the history due to the city’s drastic transformation in recent decades. Having a strong desire to protect our invaluable cultural and historical heritage, CHP launched the Friends of Old Beijing Project (FoOB) in September 2006. 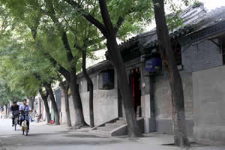 Project Goals:
1. To investigate the gains and losses in the fight for cultural preservation in Old Beijing through volunteer-conducted field research and interviews with experts.
2. To analyze and develop plans of action that could be adopted in order to advance the cause of cultural heritage protection in Old Beijing.
3. To submit recommendations for new means of preservation to relevant government agencies and media outlets via legal channels.

Project Timeline:
FoOB was divided into three phases. Each phase started in September and ended in mid-June of the following year after the celebration of Chinese Cultural Heritage Day, which takes place in the second Saturday of June of every year. CHP spent the months in between each phase carrying out program assessments and evaluating the project results.

Phase I of FoOB was conducted through a collaborative effort with “That’s Beijing” magazine, with field surveys taken by more than seventy volunteers.   Through the results, CHP was able to examine the discrepancy between cultural preservation laws and their actual implementation in the eight Cultural and Historical Protected Areas of Old Beijing. Based on this careful analysis, CHP submitted an evaluation report to relevant government agencies at the end of Phase I.

Throughout this entire process, we held monthly lectures to help improve volunteers’ knowledge, skills, and techniques on cultural heritage protection.   CHP staff also joined the volunteers in surveying, and held additional training sessions throughout the process.

The volunteers’ surveying not only helped us to write our report, but they also informed residents about cultural heritage preservation and raised their awareness on the issue.   Volunteers were able to influence the residents and strengthen the preservation of Old Beijing through the program.

Project Evaluation:
Based on the information acquired from the field surveys, CHP produced an annual report evaluating on the cultural heritage preservation effort of Old Beijing.   This annual assessment is made public every year on Cultural Heritage Day, and is delivered to Beijing Municipal Committee, Municipal Government and National People’s Congress, and Chinese People’s Political Consultative Committee (CPPCC).

CHP would like to thank our volunteer translators, Thomas White, Michele Scrimenti, and Edward Bennett for their outstanding translation of this article.