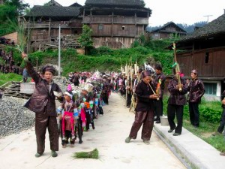 Project Overview:
The Beijing Cultural Heritage Protection Center (CHP) signed an agreement with the UN Education, Science and Culture Organization (UNESCO) in April 2009 known as the “Congjiang Archive Project Stage One Cooperation Agreement”. This program is part of a larger project, “Chinese Culture and Development,” involving eight UN organizations and funded by the Spanish Government Millennium Goals Fund. CHP is the only true NGO among the several national committees, associations, and science institutes working on this project.

The goals of the Congjiang Archive are to recognize the important role culture plays in development, help improve living standards in ethnic minority regions while maintaining cultural sensitivity, and promote the belief that cultural diversity is as fundamental to humanity as biodiversity is to nature.

After the Mengma Archive, the final result of CHP’s “Dai Culture Restoration Project,” garnered several UNESCO experts’ praise, CHP was given the opportunity to work on the Congjiang Archive Project. The Project will be conducted in the same manner as the Mengma Archive and as such will call upon participation from the local people to record their own cultural heritage.   During this process, the local participants will be able to develop a greater sense of and pride in their own culture while contributing to the completion of a pristine and vivid record of their existence, the Congjiang Archive. (The project will last three years from 2009 to 2011.)

Congjiang County is located in Qiandongnan Hmong and Dong Minorities Autonomous Prefecture on the border of Hunan and Guangxi province. In addition to the Hmong and Dong, there are also large populations of the Yao and Zhuang minorities in the area. The Dong village, Xiaohuangcun, is known for its ethnic songs while the local Yisha tribe is known as “the last muzzleloader tribe”. Another village is recognized as “China’s Number One Fertility Village” because its natural population growth rate is zero. Needless to say, the culture heritage existed in this Prefecture is extremely rich and unique.

Program Team:
Program Director | Wang Xiaowang, graduate of Fudan University’s Journalism Department, worked in media for several years before starting her own company. After working in the business world for a few years, Wang joined CHP because she felt the value of traditions and culture was irreplaceable. She has been developing the role cultural heritage protection can play in civil society.

Local Director | Liang Quankang is currently the Assistant Director of Congjiang County’s United Front Department and the Director of the county committee’s Taiwan Affairs Office. He has also been the Deputy Chief Justice of the Congjiang Courthouse, Head of the County Legal Department, County Party Secretary, and Assistant Director of the County Law and Labor Committee as representative to the National People’s Congress (NPC). From 2001 to 2006, he was the Qiandongnan Hmong and Dong Minorities Autonomous Prefecture’s representative to the NPC and is currently a member of the county’s Eighth Government Association Committee.

Liang has in-depth knowledge of the county and has felt personally responsible for the protection of local minority culture. When he was working at the courthouse, Liang conducted research on minority legal codes. As a representative to the NPA, he made a proposal for the proper development of Yueliang Mountain’s tourist attraction. At the same time, Liang was working with several other photographers to collect pictures of Congjiang minority culture and put them on a website. This website was made with a personal interest and desire in preserving Congjiang culture. Three years after working on the website, Liang Quankang is now the Local Director of our Congjiang Archive project.

CHP would like to thank our volunteer translator, Michele Scrimenti for his outstanding translation of this article.